Automation has made in-house regrinding of cutting tools more accessible. A measurement cycle adjusts the tool path in grinding operations to simplify and automate regrinding. 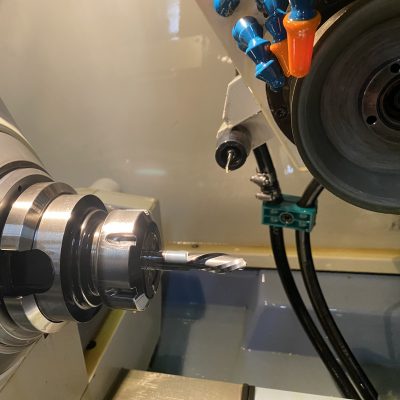 If you can extend the life of expensive cutting tools, you can buy fewer of them. In practice, the calculation is more complex. Andreas Sommer, product manager of FX CNC machines for ANCA, says determining whether a shop can benefit from regrinding depends mainly on the number of tools it goes through each day. “When a shop is setting up a secondary regrinding business, it is important to know if it is going to service enough cutting tools to be profitable,” Sommer says. He estimates that regrinding an end mill or similar cutting tool typically takes five to six minutes. Most shops make back their investment if they grind at least three hours a day at 10 tools per hour. It is important to weigh the costs and benefits if this is not your main business.”

“A reground tool should be just as effective as a new tool.”

Additionally, running a tool regrinding machine has traditionally involved finding and hiring a specialist in grinding cutting tools – another significant expense for something that is supposed to reduce costs. As automation systems have advanced, tool regrinding can be achieved without the expertise of specialists, changing the cost equation and extending the range of facilities that can benefit from in-house tool regrinding.

Both the hardware and software automation on ANCA machines are controlled by the ATM cycle. The measurement cycles automate the regrinding of square, ballnose, and corner-radius end mills, as well as drills, step drills, and compression routers. By using touch probes, all regrinding parameters of the cutting tool are established, including the OD, the end of the tool, the number of flutes, the index position of flute edges, and the flute length. As soon as these parameters are established, the system’s software automatically adjusts the grinding path of the wheel to regrind the tool as needed and compensate for any imperfections.

The goal was to eliminate as many of the difficulties associated with regrinding as possible by automating grinding-path generation. “With ATM, the goal was for a machinist to do the work of a cutting-tool specialist.” The operator still needs to set the feed rate, wheel speed and number of grinding passes, but once that is set for each cutting tool the other adjustments are automatic. This dramatically reduces the time needed to program the toolpath and enables the machine to grind large batches of tools with minimal operator input.

An Overview of Automation 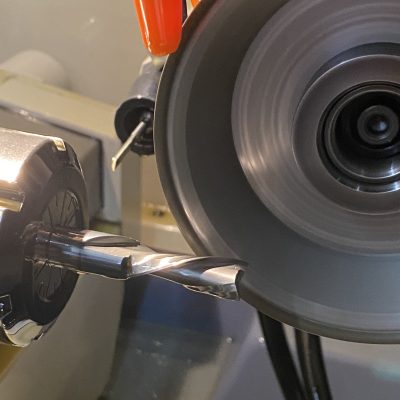 Sommer believes that automation of a regrinding solution does not stop there. “Unattended grinding is clearly preferable,” he adds. In-house regrinding is not a moneymaking aspect of the business for machine shops, so the less time spent on it, the better. ANCA offers robotic-loading options with its machines, in various configurations. For shops developing their own regrinding solutions, the company offers pallets with holes with pre-determined diameters to fit the reground tools. Alternatively, a pallet can be divided into up to three strips, each of which can hold tools of different diameters. Single-pallet solutions are especially useful in machine shops that regularly use similar-sized cutting tools since they will be regrinding the same tools over and over again and can do so while reducing robotic loading time. After each shift, the used end mills should be loaded onto a pallet, which is then loaded into the machine for unattended regrinding.

The company recommends one of two other automation solutions for tool service providers and shops with a wider variety of tool diameters. The first is a collet-loading system for small, mixed batches of up to 30 cutting tools, which can operate unattended for three hours. Collets come with a standard outer diameter so that the robotic arm can grab and load the tool and collet together. The company offers an entry-level solution on FX machines with AR300 robotic loading. To keep track of cutting tools, another automation solution uses RFID tags, enabling the robot to identify each one. Because the RFID system knows the diameter of each tool, the robot is able to pick it up and load it into the spindle individually, automatically changing the collets for each diameter. There is a capacity range of 88 to 176 cutting tools.

Despite these automation solutions, regrinding still has limitations. Sommer says reground tools should be just as effective as new ones. Shops working with difficult materials such as titanium and hardened steel may want to recoat cutting tools to ensure their effectiveness. A dedicated tool-service provider may be more cost-effective in that case rather than in-house regrinding, says Sommer.

The maximum tool size is determined by the work envelope of the grinding machine. The largest ANCA machines can handle tools up to 16 inches in length. The lower limit is less clear. Regrinding is limited at the smaller end of the spectrum due to the relative fragility of the cutting tools used, for example, in micromachining processes, explains Sommer. As well, the complexity and precision of passes can increase dramatically when working with very small tools, making programming more difficult, including more difficult to automate.

Another limitation is that cutting tools can only be reground a limited number of times. Sommer estimates that a tool will be reground two to three times. This represents two to three tools that don’t have to be purchased, so there are all the savings here. Due to the ease of using regrinding and the possibility of performing this work in-house, further savings can now be realized by not having to send the tools out for this service.